My surname "O'Loughlin" to me is a very Irish surname. Anyone with an "O" and an apostrophe must be 100%Irish - right? Here's an extract from my book "Exploring Ireland's Wild Atlantic Way" about the O'Loughlin name:


One of the things that attracts people to different parts of Ireland is the search for ancestors, and I am no different. North Clare is O’Loughlin country, and for a short time I travelled the Wild Atlantic Way in search of my own ancestors. A short distance after Black Head I stopped at the side of the road to look down at a castle which is visible for a long way along the beautiful ride on the southern side of Galway Bay. It is the sixteenth century Gleninagh Castle and it was built for the O’Loughlin chiefs who were resident there up to the 1840s. It was lived in up to the 1890s, but is still well preserved. I wondered if any of my direct ancestors had lived there. There is no shortage of people with the O’Loughlin name in County Clare, and this northern region of the county is where the name O’Loughlin originates from. At the end of the tenth century some of the Irish upper classes started to adopt Viking names such as Lochlainn, and it is thought that some of the County Clare families did so as well. The Vikings were known as na Lochlannaigh in the Irish language. My dad Joe has told me that his grandfather, also Joe O’Loughlin, was born and reared in County Clare, but he does not know which part. It could be that the O’Loughlins are descended from either the Vikings themselves, or from a County Clare family that adopted the name.


Yesterday I came across an excellent Data Visualization by Mike Cisneros on Tableau Public, which illustrates the association between surnames and racial groups. You can enter your own surname (must have appeared at least 200 times in the 2010 US Census), and enter an estimate of the assumption of which race your name belongs to. I entered 99% for O'Loughlin as "white" and was surprised to discover that this was not a correct estimate. According to Cisneros's graphic, only 92.1% of O'Loughlin's are classifies as "white" - I was off by 6.9%. So in the United States there are 7.9% of "O'Loughlins" who are not classified as "white". Cool!" There are only five races listed: 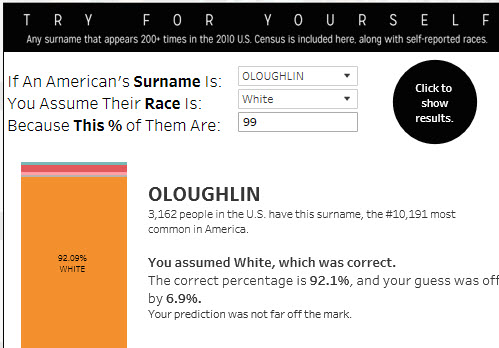 You can view the full graphic at Tableau Public, and try out your own surname.